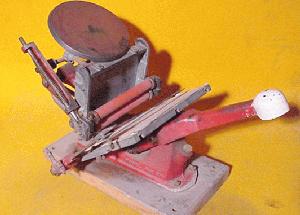 The press shown (above and below) was marketed as "Number 2, High Speed". The press was bought second-hand by Michael Isaachsen in 1952 in Adelaide, South Australia and is still available for use.

At the time, Mr Isaachsen recalls, a number of schoolboys had Adana presses. 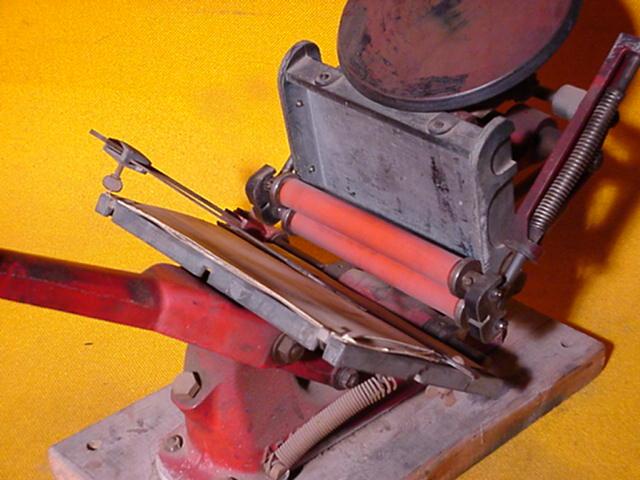 The presses were all of the letterpress platen type in many variants.

Occupational Therapy is a profession which makes use of Adana printing presses in programs designed to provide an interesting activity for people recovering from illness or regaining skills after a disability. Many O.T. departments in Australian hospitals have an Adana press. To support their range of presses, Adana also made and/or marketed a range of printing types and ancilliary units like hand-lever guillotines and thermographs.

Adana were absorbed (around 1990?) by the Caslon group one of whose specialties is thermography.

The Museum has no examples of Number One High Speed. It is the smallest, with a type area around business-card size.

Number Two H/S is well represented, as is Number Three.

No. 2 H/S has a print area of 4 x 6.5 inches. This is the measurement inside the four-wall bed, which is removable to facilitate lock-up directly in the bed. The provided chase has inside measurement of 4.125 x 5.75 inches. No quoins are needed in the bed or in the chase, as each has grub screws on two sides for lock-up.

These are the latest models, having come into production around 1950. The Model 53 was discontinued around 1985, while the Model 85 is possibly still being produced. There were a number of design changes over its years but it is still recognisably the same machine.

The 85 and 53 both had variants with a feeder for overprinting on rolls of self-adhesive labels. Label advance was by a claw which found the gap between labels. Butt-cut labels, therefore, were unsuitable.

The Museum has a number of each, including the variants equipped for automatic feeding of roll labels.

Other models included treadle and motorised free-standing presses with ink cylinders (rather than disks) and horizontal-bed, tabletop units with few moving parts. Return to top