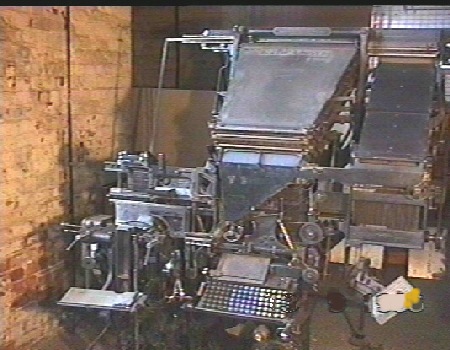 LINOTYPE LINECASTER
The museum has about 30 Linotypes ranging in date from 1905 to about 1980 and varying in condition from excellent to hopeless.

The function of the Linotype (and its competitor the Intertype) is to produce lines of type. These lines are generally called slugs, an engineering term meaning a piece of metal.

A slug is a strip of metal, about 23 mm wide, a few mm thick, and up to (typically) 100 mm long. The letter-forms are cast (in reverse, like a stamp) along one of the narrow edges. The thickness of the slug is set by the operator to suit the point-size of the type and the length is set to suit the printing-width of the job being set.

When in position to be printed, a number of these slugs are set side-by-side, with only the type face visible.

The 23 mm measurement (above) is called the type height. Although it varies a little between countries, it is an absolute within any print-shop. The linotype slugs can be interspersed with type of other systems such as hand-set. They are all the same height.

The slugs are produced by pressure die-casting. The molten type-metal, held in a small melting pot, is pumped into a mould, where it solidifies almost instantly.

The top face of the mould is covered by the letter-forms which are to be cast onto the slug. These letter-forms are called matrices (or mats for short).

The mats are assembled by the operator into words, with space-mats or space-bands between them. When one line of mats is complete, the whole line is transported by the mechanism to sit over the cavity of the mould and be squirted with hot metal.

After the line is cast, the mats are transported to the top of the machine from where they are returned to the magazine in which they are stored. 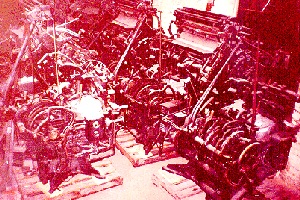