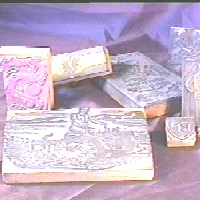 These cover several dozen printeries and in some cases seem to be their entire collection of blocks. Some printers never throw anything out, so there are some very old blocks in the collection.

The blocks relate to books, magazines and newspapers, commercial printing and social printing. There are many advertisements and company insignia, business forms, clothing labels, greeting motifs; and half-tones ranging from head-and-shoulder shots to rustic and architectural scenes. There are a number of three-colour and four-colour sets, in some cases copper-plated.

As with most of our collections, a great amount of work still needs to be done in taking care of these items and cataloging them.

The great majority of these engravings were produced by photo-engraving. This starts in a process camera by making a photographic negative of the image, on process film which has no greys, just total blacks and clear film. The clear areas correspond to the black areas on the original, and when the engraving is printed, will be the "image areas".

A sensitised plate of metal (zinc, magnesium or copper) is then exposed through the negative. Where the negative is clear (the image areas), the light strikes the sensitive substance and it hardens.

The plate is washed and the hardened material remains while the non-image areas (those not affected by light) are reduced to bare metal.

The plate is then treated with a strong acid which eats away the unprotected areas of bare metal, leaving the image areas untouched. The image areas are therefore higher than the etched-away, non-image areas, and will receive ink and contact the paper.

The engraved plate is then trimmed and usually mounted on wood to make it "type high" for printing alongside a typesetting.

In the case of photographs, the continuous tones (varying shades of grey) of the original are converted in the process camera by placing a screen of ruled glass just in front of the film. The resulting image on the film has no greys but varying sizes of tiny dots which when printed give the impression of shades of grey.

A small number of engravings in the collection were made on the Klischograph system. The original line drawing or photograph is attached to a rotating cylinder, and a piece of plastic foil is placed near it. As the cylinder rotates, a detector measures the darkness of the image at each point and signals an engraving tool which removes tiny pieces of material from the foil: a lighter image is produced by the tool cutting deeper.

These machines were popular in Australia in the 1960's and enabled smaller and more isolated newspapers to produce their own engravings rather than depend on a (possibly far distant) photoengraver.

The collection also includes a small number of illustrations engraved by hand on wood. Until the availability of commercial photoengraving around 1900, many printers depended on wood engravers, even when the original image was a photograph. Return to top 